Troubleshooting a path through the transit gateway can seem like a hard task since you won’t have visibility into every single piece of networking that the packet will go through. By following a systematic approach you can make sure that everything that is needed to be able to route successfully from an EC2 host in one VPC in a region going through a transit gateway to another region and back down to another EC2 host in that VPC is setup correctly.

Im not going to lie. This is a very tedious troubleshooting scenario. If the IDs for each piece don’t match up or if the CIDR range is no correct for a route table, trying to reach the other side via a ping or opening a connection to the other host will just fail silently. We don’t have visibility into AWS’s routers to see where it is failing on this path.

In the following diagram we are going to map out how EC2-1 will reach EC2-2 and trace out the path. 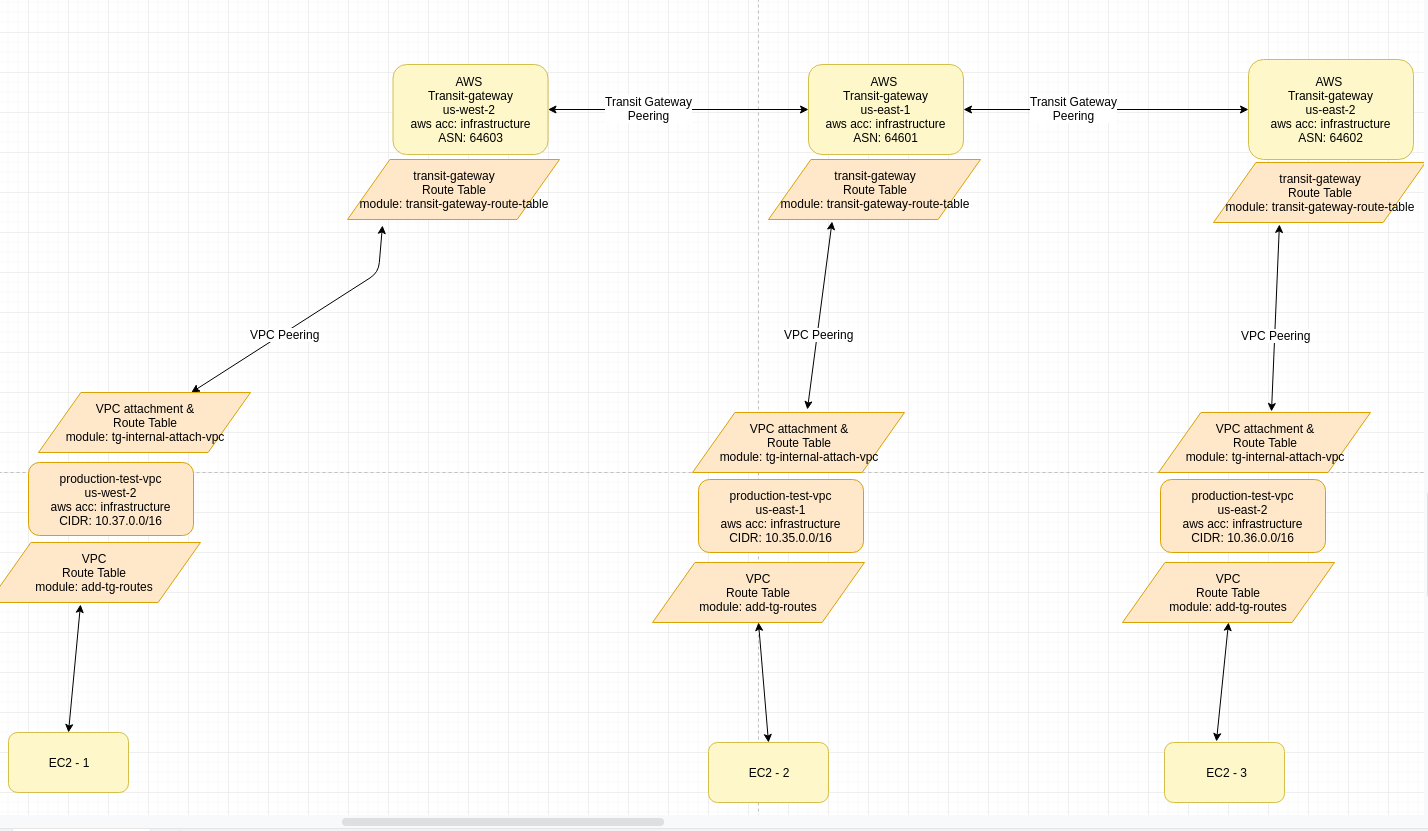 The first thing to check is to make sure the Transit Gateway is setup correctly. Without this, you will not be able to add the routes to the EC2’s instances routing tables.

In the AWS console go to: VPC->Transit Gateway 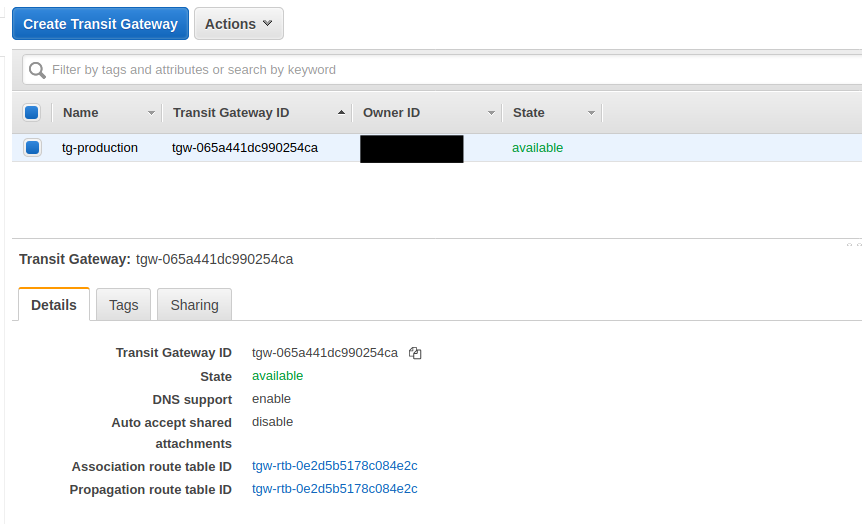 You should have a Transit Gateway here =)

The Transit Gateway has a bunch of functionality and ways you can use it and it is just a resource. You have to attach this resource to something. 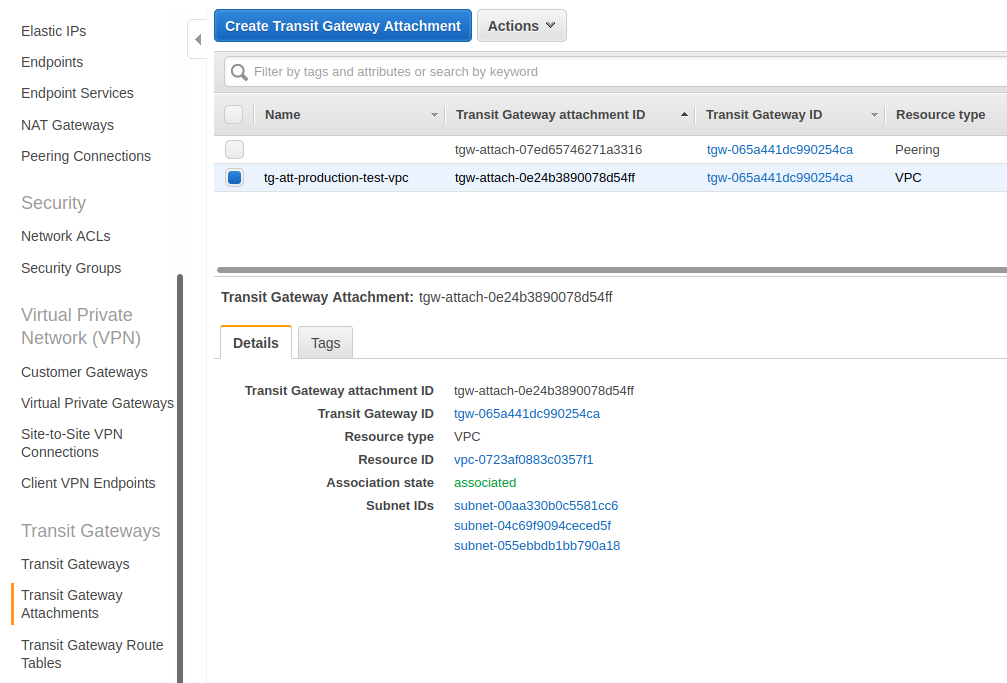 I have highlighted the second row (we’ll talk about the first row later on). This is a Transit Gateway attachment to a VPC. This binds the transit gateway to the VPC where our EC2-1 host lives.

Another important thing is to note the Subnet IDs in this page. These are not the subnets that our EC2-1 host is in but these are subnets in the same VPC. For the Transit Gateway to route properly, it has to be in all of the AWS Availability Zones that you want it to route into for that VPC. There are 3 subnets here because we are in 3 different availability zones. This is a side fact that you will just have to remember on how the Transit Gateway works.

We have the instance named EC2-1 which is in the us-west-2 region:

There two things we want to check in here.

Note: You will notice that this subnet is not in the list of subnets in the Transit Gateway Attachments. It doesn’t have to be.

Check is the EC2-1’s security group

The first thing to check is the EC2-1’s security group:

The second thing is to click on the Subnet ID. When you get on that page, you can click on the Route Table tab and it will show you the following: 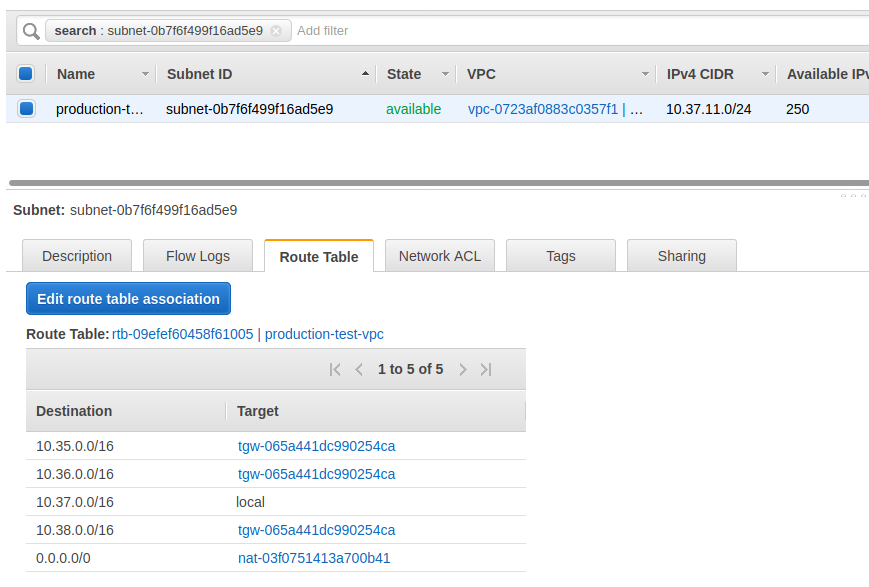 The following is the route table that is associated with this subnet and the routing configurations for it. It lists out destination CIDR ranges where traffic to go and where it should send that traffic via the Target location.

While you are here, you should click on the Network ACL tab to take a peak to make sure there are no ACL rules in there that would block the traffic that you want to send through (this has definitely caught me onece or twice and I am going around rechecking all kinds of things before I finally realized that it was the Network ACL that was blocking traffic). 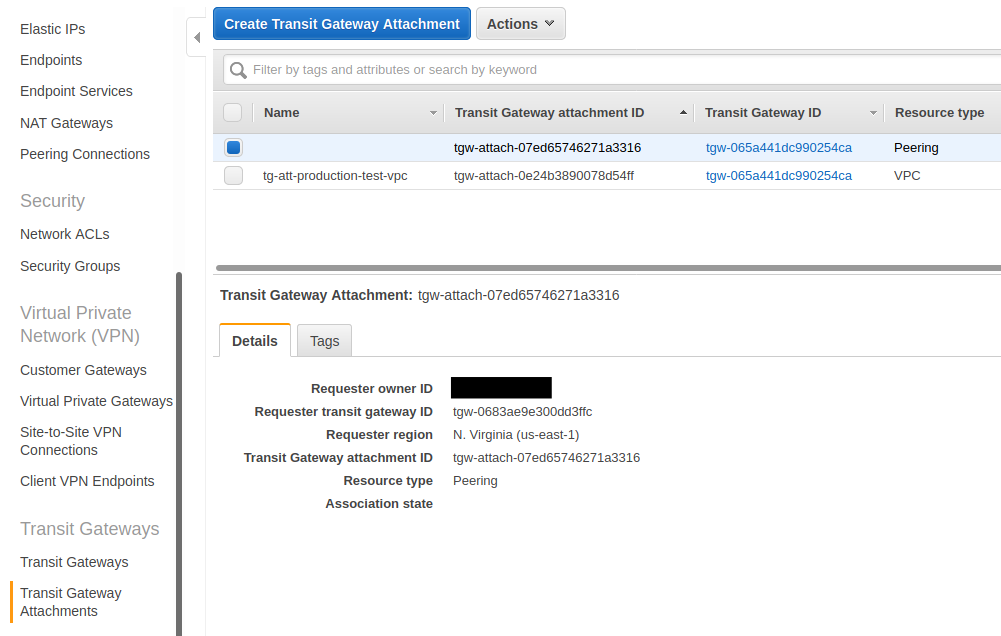 We will need this peering attachment active to continue to push traffic through to the other side. 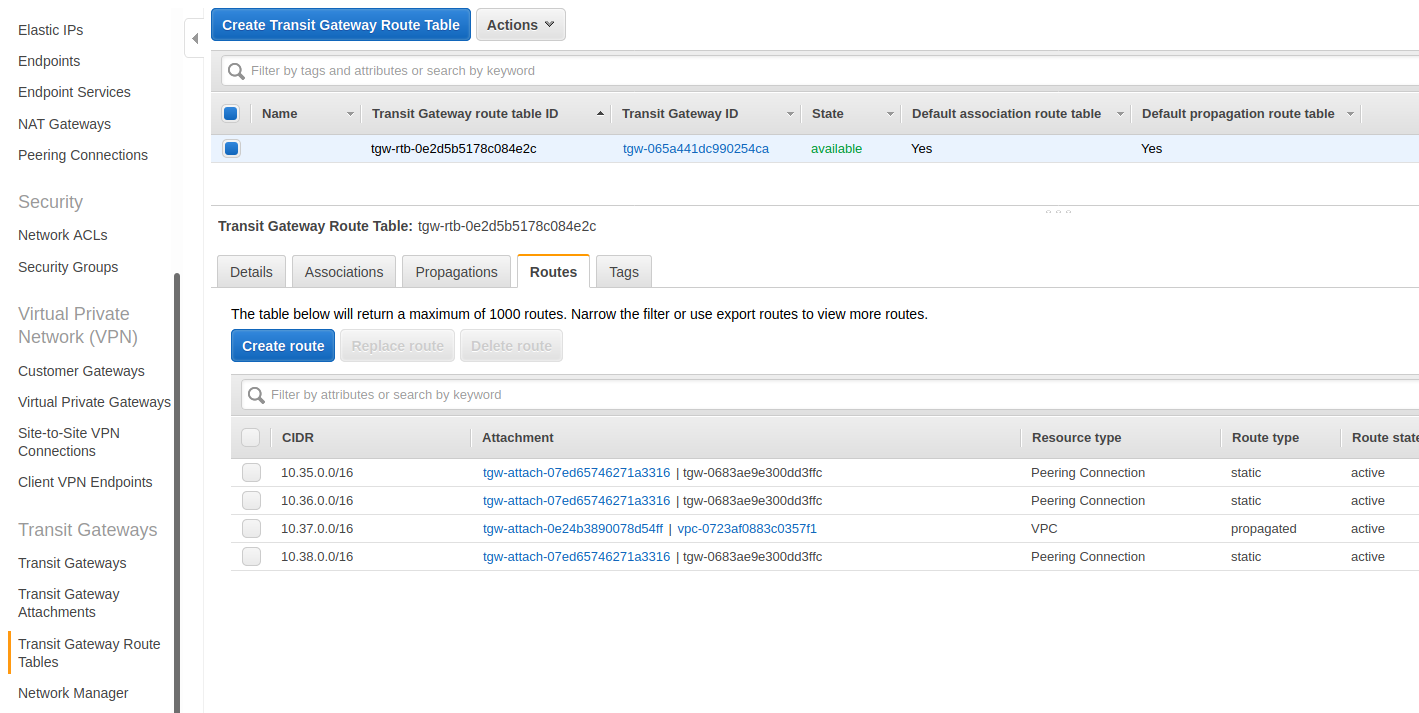 Now we start to look on the other side in us-east-1’s configuration to make sure it is correct. This configuration is essentially the same as what we have gone through above. We will go through the same sequence but with us-east-1's configs. I will only point out the differences here and not repeat what was sadi above.

This Transit Gateway attchement is a little bit more interesting than the one in the other region because this is the “hub”. Both us-west-2 and us-east-2 peers with this Transit Gateway. It just has more attachments and the configuration is about the same.

We want to make sure the VPC where the EC2-2 instance is located in is attached here and for this particular troubleshooting exercise we only care about the peering with us-west-2 is active.

Let’s jump over to the EC2-2’s configuration and start there.

We want to check the same thing as we did before. The security group and then click on the Subnet ID.

This route table is the same as the other sides. We just want to make sure everything is correct in here. 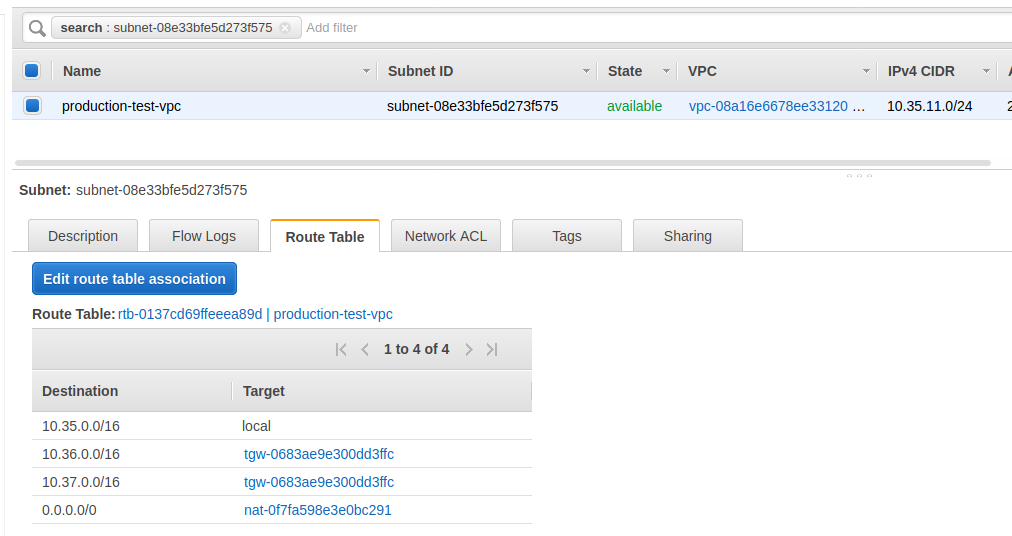 Same thing here as above. This is the Transit Gateway’s route table with basically the same info as the VPC route table but just on another level.

Yes, this is tedious. I wish it wasn’t so. You have to maticulously go through the path and make sure that each route table is in place and that the IDs that it is using is the correct one. There isn’t such great visiblity into the networking and this is the only way I found that is effective. If there is a routing problem, I first make sure everything is in the correct place. Then expand my troubleshooting efforts out from there.

The troubleshooting technique above is generic to most Transit Gatway setups no matter how it was created. If you would like to see how it was created or create the above setup or a similar setup with Terraform, I have published all of the modules and example usage for it here: https://github.com/ManagedKube/kubernetes-ops/releases/tag/v0.1.14.

You can use this this set of modules to create this exact setup or something similar to it using the various Transit Gateway modules in here.

Contact me if you have any questions about this or want to chat, happy to start a dialog or help out: blogs@managedkube.com {::nomarkdown}

< Previous View All Next >